Welcome To Our Blog..

Architectural History of The Cupola 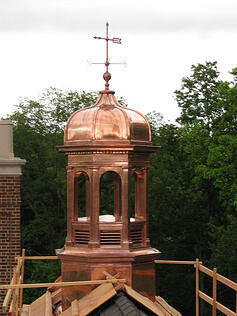 A Cupola (pronounced "kyou'puh luh") is a structure that sits atop a larger rooftop or dome and can range in size from very basic and small, to extremely large and ornate. The small can be a simple vented box you would see on a barn while the cupola on St. Peters Basilica in Rome is an example of the other extreme.

Large Cupolas may be accessible from a stairway on the inside giving a commanding vantage point from which to look out over the world.  This kind of cupola is often called a belvedere or a "widow's walk".  Often smaller cupolas are constructed without accses from inside and windows are added which provide a natural light source for illuminating the spaces below, these types of cupolas are also known as "lanterns".

History of the Cupola

The origins and history of the Cupola can be traced back to 8th century Islamic architecture. These first cupolas placed atop minarets, were large and sometimes ornate structures with one or more balconies from which the daily call to prayer would be announced. These early cupolas are very significant because they are believed to be the inspiration for the dome which led to massive achievements in architectural design. These bold new designs that emerged, were used as symbols for proof of cultural superiority. During the renaissance, most major european cities and Islamic states were building a plethora of these magnificent buildings. The cupola had evolved to allow architecture to become a very artistic and creative status symbol and Today, the cupola stands as a statement of a major achievement in architecture.

Why Add A Cupola?

Installing a Copper Cupola to your new or existing home is a great way to add interest and character to your roof top. Adding this architectural detail will provide valuable curb appeal that will certainly make your home stand out in your neighborhood. A cupola's main function is to provide ventilation. By removing moist air from your home you will prevent a bevy of problems, such as mold/mildew, peeling paint and premature rotting of the wood in your new or renovated home. Proper ventilation is a must in any building and is often overlooked todays new homes. Proper ventilation becomes especially important in coastal areas and humid climates and adding a functioning copper cupola is bound to save you money over it's lifetime.

Tags: History of Cupolas, Copper Cuploas, what is a Cupola?, History of the Cupola